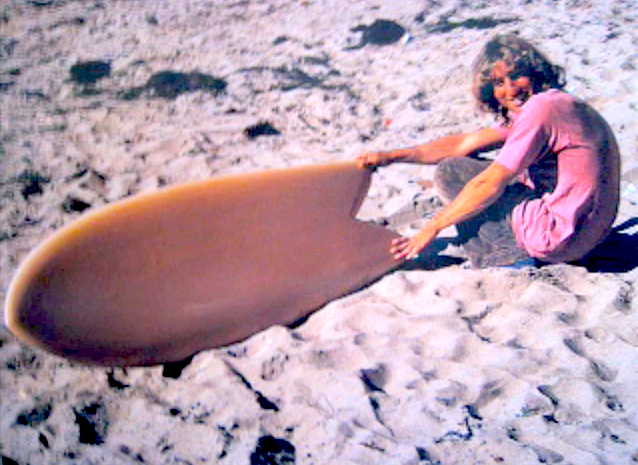 The Fish Surfboard – A Short History

In the late Sixties and early Seventies two young Hawaiians named Reno Abellira and Jeff Ching recognized the potential of the fish design as a means to fulfill their boyhood dreams of mastering the art of stand up paipo riding. Both Reno and Jeff grew up riding paipos at the Wall at Kuhio beach, and both were spellbound by the amazing stand up paipo style of Valentine Ching, though they found it too difficult to stand up on a paipo themselves. Jeff moved from Oahu to San Diego in 1966 to attend Cal Western University in Point Loma. After arriving there he befriended a local teenage kneeboarder named Steve Lis, who, in January of 1967 created a tiny split tailed kneeboard design he dubbed the “fish”.

With it’s unprecedented speed and traction the fish was the most progressive surfboard to emerge from the 1960s shortboard revolution. Coming from a background of bodysurfing and bellyboarding Lis had intuitively arrived at some of the same design solutions as Bob Simmons had 15 years earlier, but in a much smaller, refined, and more maneuverable package. What he had created was essentially a buoyant paipo board souped up with elements of Simmons’ basic planing hull design. Lis was a phenomenal kneeboard surfer, and he rode in a manner that conventional surfers would not equal for decades. Inspired by watching Lis ride and by his memories of Valentine Ching’s paipo riding in Hawaii, Jeff Ching decided to try riding Lis’s tiny, paipo-like kneeboard as a stand up board. The result was a hyper-leap forward in stand up surfing performance. From that point on the San Diego fish cult rapidly evolved in almost total obscurity at the reef breaks of San Diego’s Sunset Cliffs area.This was one of the most dynamic and creative scenes in the history of modern surfing, and it all went down under the radar, intentionally.

Creativity fueled by regular doses of psychedelic drugs, the fish crew surfed Lis’s little aquatic skateboard in a style that foreshadowed the coming revolution in skateboarding soon to be ignited by Frank Nasworthy’s release of the urethane wheel in 1973. Nasworthy himself is a life long fish devotee. Meanwhile, Reno Abellira evolved as one of Dick Brewer’s mini-gun test pilots in the late Sixties. In 1972 he witnessed Jimmy Blears and David Nuuhiwa ripping trashy waves on very short fish boards during the finals of the World Contest in San Diego. Reno went on to make himself a fish-like twin fin to deal with trashy surf at the Coke Contest at Narrabeen in Australia in 1977. Mark Richards was inspired by Reno’s board, which led to him to create the MR twin fin in the late 70s. A few years later Simon Anderson took the multi-finned board a step further with his Thruster design and the modern “shortboard” was born.

Lis Fish from Hydrodynamica on Vimeo.