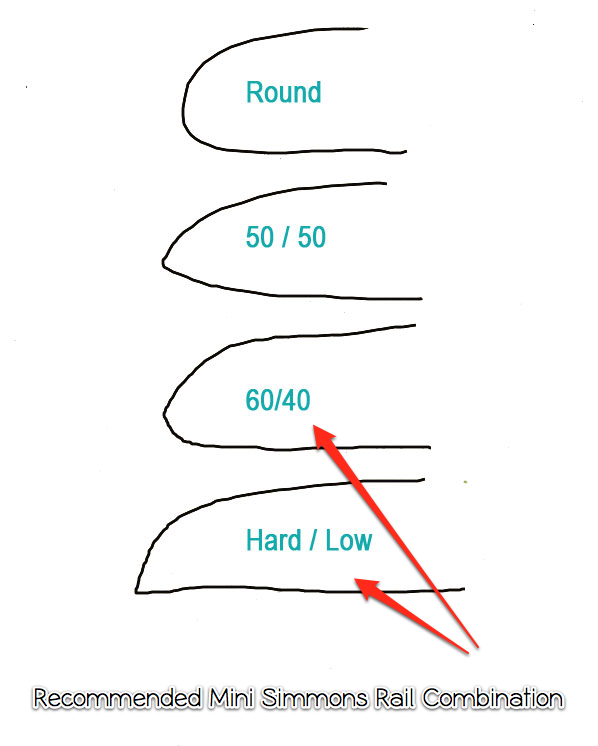 First of all, we got to think about what happens at that edge where your surfboard rail and the wave meet.

There are two options at that edge in a turn, sink or unsink your rail. But we’re not always turning, so that rail also has to be designed for flying down the face and gathering speed—thus your design must accomplish two goals for down-the-line surfing: reduce drag and release energy.

You have to design for turns and speed.

Ok, now we have to think about the different rail types and the functions of each. I like Dave Parmenter’s description of rails, so I’m just going to quote him here:

“An over-simplified primer on rail shapes would probably contain these main premises: the lower and harder a rail is, the faster and stiffer it will be. The softer and rounder, the slower and more neutral-handling it’ll be. Fuller, boxier rails are harder to sink, so have more potential for leverage. Thinner, tapered rails sink easily, but with less stored energy, are not as likely to leap out of turns.”

Leaping and going fast: these are the characteristics that I want for my Mini Simmons.

Let’s look in more detail at the types of rails:

You got to consider your surfing style and pick the rail design that best matches how you want the board to perform. The rounder and softer the rail, the slower and more easy handling it will be. Think of a long board, most of these shapes have rounder rails and are for slow turns.

A hard rail provides better traction but can catch an edge easier then a soft rail, think Slater in the pit or Dane throwing a big turn. The lower and harder a rail is, the faster it will be but it won’t be very maneuverable.

Thinner, tapered rails are good for quick turns, they sink easily—but they are not able to carry speed coming out of a turn. Yet, fuller rails are harder to sink, which can translate into more drive coming out of turns as they bounce back from being sunk underwater.

I have shaped quite a few Mini Simmons with different rails and what I have found is that the 60/40 rails to 80/20 rails that get harder towards the rear work the best. In fact, these were the same types of rails that Bob Simmons was using on his boards towards the end of his shaping experience after years of testing and refining. I am more than happy to follow Bob’s lead.

Whatever rail you pick, have some fun and please let us know about your shaping experience.